Find the Scandi in You

Wrap up warm and be prepared to be taken on a journey. Tread in the deep, crisp snow, wander through the colourful and narrow streets, forage in the vast woodland, gaze into and fish in the bright blue waters and feel the warmth of family and friends as you simply break bread or share a feast with them. Be guided through the land, the culture, the food, the atmosphere and the seasons by the Scandinavian Cookbook.


As you might expect, the Scandinavian Cookbook is cleanly, clearly and efficiently laid out. The month themed chapters help you to eat with the seasons, though of course there are recipes which will see you right at any time of year.


And the recipes don't disappoint: with a great deal of dishes quite unique to Scandinavian cuisine, the food is fresh and healthy and packed with flavour. There are a fair amount of fish recipes but also a lot of baking, desserts and treats as well as a wide selection of meat and vegetable dishes and not forgetting the pickles and berries.


Recipes are accompanied by snippets of background information, insights into the Scandi way of life and some very personal stories about the author's Danish upbringing. The photography, from Lars Ranek, combined with these accounts, brings the book to life, giving the reader a real sense of the place as well as the obligatory dishes to drool over. 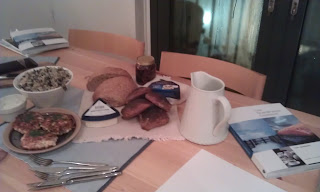 But what might you be feasting on? There is, of course, a recipe for Swedish meatballs and I urge you to go ahead and make your own, the result was much more satisfying than Ikea meatballs, though there's nothing wrong with indulging in a plate of those every once in a while to help you survive a trip to the big blue and yellow place! We had ours accompanied by some roasted potatoes, greens, pickled cucumber and berries (we used the suggested substitute of cranberries due to a lack of lingonberries). The only thing missing was the 'gravy' but a quick search on Google and the meal was soon complete.


But, not surprisingly, there's more to Scandi food than meatballs. The Scandinavians have, as have many cultures, adopted the burger and made it their own. There are two unusual recipes: Bif Lindstrom, a beef burger containing capers and beetroot, and an incredible fishy equivalent; salmon burger with a chive and mayo dressing.


A trip to Scandinavia wouldn't be complete without some reindeer (well, we had moose which we found in Lidl). Reindeer (or moose) steaks with their spicy black pepper and aniseed crust, served with a potato and celeriac gratin and roasted sprouts was a perfect wintry Sunday dinner.


The veal with baked rhubarb and barley salad was a great way to enjoy the vibrant pink forced rhubarb available in the early months of the year, whilst, if baking is more your thing, we had fun experimenting with the yoghurt and wheatgrain bread and the spelt buns.


For dessert, some apples, past their best, and some stale bread magically transformed into a divine apple trifle, and to accompany your Danish blue cheeses, how about the walnuts pickled in wine?


This beautiful book brought back memories of a wonderful and chilly week exploring Stockholm two years ago, and with Angie having just returned from a friend's wedding in Norway we had plenty of stories of our own to throw into the mix, as well as some extra tasty treats to sample which Angie brought back with her. Let yourself be transported to Scandinavia and embrace the Scandi in you. You won't be disappointed.
Posted by marmite at 20:32 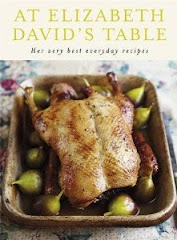